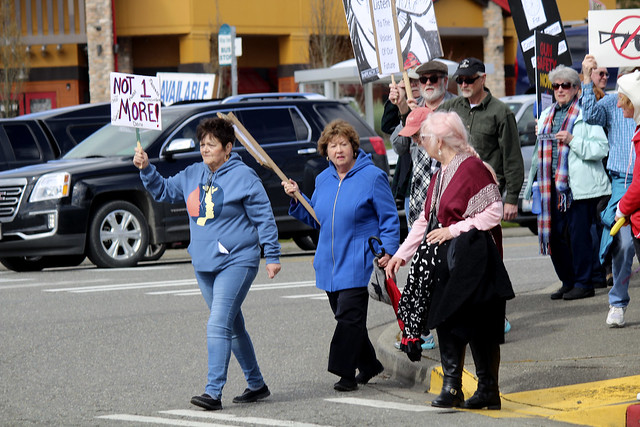 SILVERDALE — On Saturday, March 24, thousands of people throughout the nation embodied the saying, “United we stand,” for they stood united to promote school safety and gun reform.

“March for Our Lives” was the name of the protest, which took place simultaneously in hundreds of places throughout the country, including in Silverdale, from noon to 2 p.m. Participants gathered at the Silverdale Way and Kitsap Mall Boulevard intersections and marched around the Kitsap Mall for two hours waiving signs proclaiming, “Not 1 more,” “Protect children, not guns,” “Bullets are not school supplies,” “History has its eyes on us” and more.

This was organized in response to the Parkland, Florida, school shooting Feb. 14. According to the Facebook event page: “In the wake of the February 14 Florida shooting, a group of former Kitsap County educators and community activists founded ‘4 the Kids — Kitsap,’ whose goal is to support and connect local high school students and the community in actions and policies that promote safe schools and leadership for change. The Silverdale rally is one of over 500 marches planned nationally on March 24 to both commemorate the Valentine’s Day tragedy and demonstrate that Kitsap County cares.”

This movement was also represented in the Naitonal School Walkout March 14, exactly one month after the shooting. Another walkout is planned for April 20, the anniversary of the Columbine massacre in 1999.

“Change is coming. Students of Marjory Stoneman Douglas High School are leading the charge, spawning a survivor-led movement to demand widespread change in gun policies,” 4 the Kids — Kitsap posted. “The students have been joined by retailers Dick’s Sporting Goods, Walmart, REI and Fred Meyer to impose restrictions on the availability of guns and to curtail association with companies that sell firearms. Be a part of this change.”

At the march, more than 100 people showed up to demonstrate their support for the movement, prompting many supportive honks from passing cars.

“It was so uplifting and awesome to be surrounded by fellow members of the community coming together about this issue,” Danielle George said on Facebook after the event.

Liana Rogayan said, “It brought me to tears seeing all of my fellow Kitsap citizens coming together for change because they want a better society. Thank you to each one of you who showed up for activism. It is a wonderful sight. I love Kitsap’s people. Way to be y’all. We have to believe we can effect change in our nation and work for it with passion and perseverance.”

For more information about the movement and upcoming events, visit marchforourlives.com, or www.facebook.com/4theKidsKitsap.

Michelle Beahm is the online editor for the Kitsap News Group. She can be reached at mbeahm@soundpublishing.com.

Youth center, ‘The Next Door,’ opens across from NKHS

The Next Door, a youth center for teens, has opened across the… Continue reading

A lonely, difficult - and educational - journey these 12 months for Kitsap’s small-business owners

‘Chat With The Chief’

District voters will be asked to renew levy on Aug. 3

Opponents say it will hurt consumers