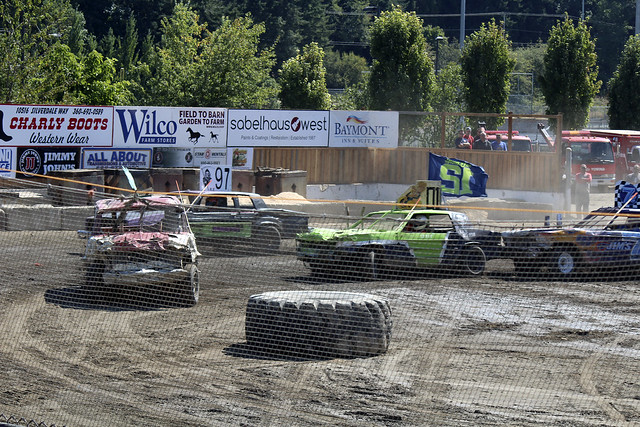 BREMERTON — “You have to know something about the mechanics of a car or truck, and know how to drive to be successful at this,” said Bria Steele, one of a handful of women drivers in the Kitsap Destruction Derby Association.

“To some people, it looks like we’re just out there banging into each other. But it’s more of a game than that.”

The association’s Destruction Derby on Aug. 27 was a highlight of last weekend’s Kitsap County Fair.

To the untrained eye, it looked like a bunch of cars just going at each other. But to expert drivers in the sport, it’s more of a science.

About 10 to 15 drivers in full-size trucks went head-to-head — and, sometimes, rear-to-rear or side-to-side. Drivers were timed and had a limited amount of time in which to make contact with another car. The races were emceed over a loudspeaker.

The drivers are all club members and are well trained in how to drive and hit safely in the derby and are fully equipped with safety gear.

“This is a full-contact sport,” said driver Dan Pieze. “What we’re really known for is our racing.”

Indeed. The drivers do figure 8 racing, oval and then the derby finale. There are two classes, full-size cars and compacts. And at some races, there’s a division for trucks. Most drivers will get up to 40 mph on dirt tracks, and 60 mph on paved tracks, such as at the fairgrounds in Monroe.

The association is in its 47th year. According to the association’s website, it grew out of stock car racing when that club held demonstrations for the “drivers who like to bump a little too much.”

Today, the association has about 40 local members who come together once or twice as month to race at the Kitsap County Fairgrounds. The race season runs from May to September. It operates as a nonprofit and has events to raise money for charities, such as Children’s Hospital and local cancer associations.

“It’s really a family event,” Pieze said. “Most of the drivers today grew up in it, watching their dads race.”

That’s the case for him. His father, Dana, drove. They own Dana’s Heating & Cooling, Inc., a sponsor of the association. Today, Pieze drives a 1972 Cadillac. It’s been his derby car for about the past five years.

“How long you can race the same vehicle all depends on how well you know how to build a car and what car you purchased,” he said. “If you know a little something about mechanics and you know where and how to make contact with another car, you can keep a car for years.”

The drivers of each car are generally its mechanic, too. Each driver will repair their car during the off-time and then be back out there for the Saturday races. Each driver also has a pit crew.

Sometimes, it’s family in the pits, Steele said. She drives a 1966 Imperial.

“My sons and their friends work in the pits for me,” she said. “And each of my sons want to drive when they are old enough.”

All cars are equipped with bars on the sides of the vehicle for safety. And there’s a rule that you can’t ram a driver’s side door. The cars are built with a “safety cage” design to keep the driver from getting hurt.

Pieze said in most cases, derby is a hobby where “you break even.”

“There are cash awards for those who win each race,” he said. “But most of the time, that money goes right back into fixing the car. Generally, you just break even.”

Shows that are sponsored by national race car promoters have bigger cash awards, he said, but often times they are more expensive to enter. Pieze said club-sponsored shows are more of a family event.

The derby racers race in heats and each driver can do as many races as each wants to.

“But they may have to fall out of a race and go to the pits to switch out a flat tire,” he said. “Then, when they’re ready, they’ll jump back in.”

In the final race, the winner is the “last man standing,” he said.

Learning to race gave Steele more confidence as a driver.

Likewise, Pieze’s 18-year-old daughter drives, and his 16-year-old son will. All drivers must be at least 18.

Another reason drivers race in the derby is to reduce stress.

“That may sound funny,” Pieze said. “But when everything is going right, it can be a very good stress reliever.”

Derby drivers come from all walks of life. Pieze is a business owner and Steele owns a construction company, BGD Construction in Seabeck.

“It’s important for people to know that we are local business owners,” Steele said. “We’re not just a bunch of hicks or rednecks doing this. We do it for the sport and we do it for the camaraderie. It’s a great way to spend quality time with the family.”

All photos by Michelle Beahm, online editor for Kitsap News Group. She can be reached at mbeahm@soundpublishing.com.

Walla Walla Valley continues to build its reputation with reds

Voting on now for Best of Kitsap County 2020

Vote once per day through Dec. 29

The winners of the Kitsap County Pet Photo Contest, sponsored by the… Continue reading