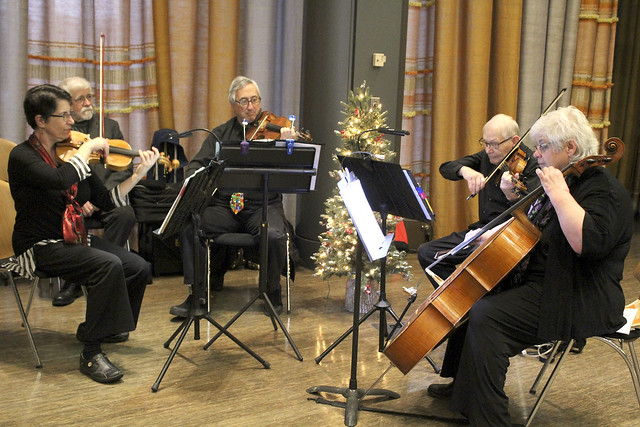 BREMERTON — Eight years ago, Patty Lent was elected mayor of Bremerton. On Dec. 28, as she prepared to make way for her successor, Greg Wheeler, Lent said farewell as mayor at a ceremonious party filled with well-wishers and kind words.

In the City Council chambers at the Norm Dicks Government Center, so many people turned up to her farewell party that more chairs needed to be brought in, and still it was standing-room only, with just enough space for tables of food, a large sheet cake and a string quartet providing a musical backdrop to the evening’s festivities.

“If you look around this room … I didn’t realize that we would have so many people between Christmas and New Year’s for a farewell,” Lent told the crowd as people filed inside. “Each of you has inspired me. The difference I’ve made is because of what you have done and what I have done, together. When anyone applauds and anyone remarks, please think of where you are and the fingerprint we share in this entire community.”

Early on, people passed around a microphone to express their gratitude to Lent for her service as mayor.

“You inspired our young people to become leaders,” she said. “We will truly miss you. We hope that you will continue to have a footprint in our community and to continue to support all the efforts that we have here in the City of Bremerton. We truly support all that you do.”

Another woman said, “Like all of you, I am going to miss her as mayor. But as a citizen? No. She’ll still be here. But as a mayor, she left a legacy that no one can compare.”

Throughout the evening, Lent received dozens of thanks — in the form of comments shared over the microphone, as well as one-on-one chats, hugs, selfies and other expressions of gratitude, including bouquets, plaques and a key to the city.

David Mitchell, now-retired president of Olympic College, said, “If I had a key to the college, I’d give you one.”

Lent told the crowd, “I’ve enjoyed every minute as a mayor. We’ve had eight years of making changes … I could never be what I am here, or do the things I was able to accomplish, without the direction and without the employees that work for the city. You are in such good hands. They are strong and they are vibrant and they are a team.

In a later interview with the Central Kitsap Reporter, Lent emphasized her appreciation for her time as mayor.

“I enjoyed every minute,” Lent said. “It was a labor of love for the things that I did.”

She said she initially only intended to serve one term as mayor, but her first four years in office were spent helping the city get through a recession.

“These last four [years] have been remarkable,” she said of her second term. “All the changes were made, [we] accomplished a lot of things, and brought our employee base back up.”

As the end of her second term neared, she said she didn’t think she’d run again, “but I found out there were four things that were not accomplished,” Lent said. “That’s why I ran this last time.”

“I’m going to take three months,” she said. “[My husband] and I are going to Mexico in January, Hawaii in March.” It will that time, she said, to determine her next course.

“I do have lots of energy,” she said. “I’m not going to be idle, but I want to make certain what I do is going to make a difference.”

Will she run again? She’s not saying never.

“I think I’ve done a lot as an elected [official], and I think I might do just as much in a capacity where I don’t have to have a title,” Lent said.

She added, “I know the city will thrive. All the people that make up our city will continue to have a good quality of life.”

Port Orchard, South Kitsap take good with the bad in 2017

As a means of preventing the potential spread of coronavirus, the North… Continue reading