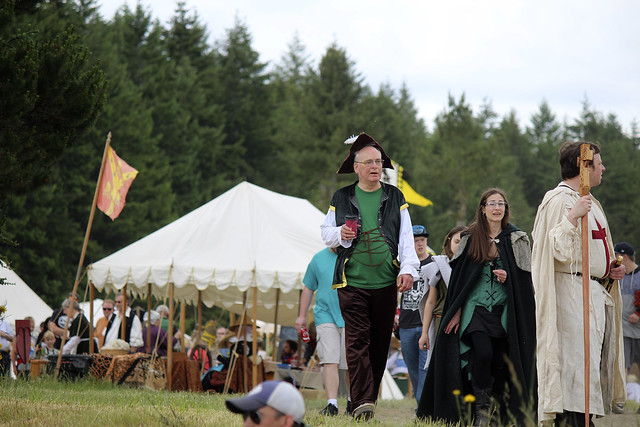 BREMERTON — The 35th annual Kitsap Medieval Faire, hosted by the Society for Creative Anachronism’s Kingdom of An Tir, was Saturday, June 3.

At the faire, visitors were able to witness medieval war reenactments and tournaments, rapier fighting (including situations similar to scenes in The Princess Bride), siege weapons, thrown weapons, archery, medieval games and arts and sciences.

In the artisan village, SCA members demonstrated weaving, pottery making, wood carving, blacksmithing and more. There was also an opportunity to purchase items from the merchants who sold clothes, accessories, weapons and more.

On top of the regular festivities, the Kingdom of An Tir also held a silent auction, the proceeds from which are going to another SCA Kingdom, which had a great deal of its accrued items stolen recently.

For more information on the faire, visit www.kitsapmedievalfaire.org. If interested in joining the Kingdom of An Tir, a Newcomer’s Night will be from 6:30-8:30 p.m. June 6 at the VFW Hall in Central Kitsap, 9981 Central Valley Road NW.

Read more about the Kingdom of An Tir in the Kitsap Daily News series of articles, available here, here, here and here, or visit the Kingdom website, www.antir.sca.org.

All photos by Michelle Beahm.

Michelle Beahm is an editor with the Kitsap News Group. She can be reached at mbeahm@soundpublishing.com.