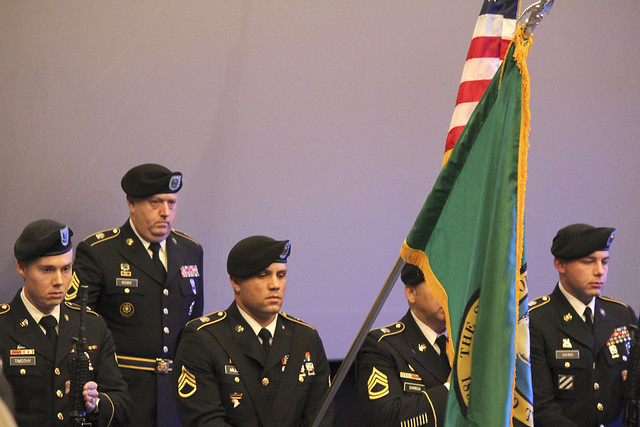 GIG HARBOR — “Space Station, this is Houston. Are you ready for the event?”

“Houston, this is Station. We are ready for the event.”

Mackenzie Mills, a double science major at Johns Hopkins University, told the students. “Nine years ago, I was sitting exactly where you are today. I had a chance to speak with someone orbiting in the stars above me.”

Now, she plans to someday become a NASA astronaut. “If your dreams don’t scare you, you’re not dreaming big enough,” Mills told students. “And that’s what I want you to do: Dream big.”

Students from South Kitsap, Bremerton, Central Kitsap, North Kitsap and Suquamish schools were in attendance. Students from schools who couldn’t attend the downlink were able to watch it online. The downlink was recorded for later viewing in classrooms.

One student, Ronan, asked, “What does the endless void of space feel like?”

Vande Hei responded after a moment’s thought, “The simple answer is, it feels very, very big. When I did a spacewalk and we opened the hatch of the space station to go outside, the light reflecting off Earth when I got outside became very, very bright. There was nothing between me and Earth except my space suit.”

Looking away from Earth and toward the stars, however, “all I [could] see was blackness. The scale was very hard to comprehend. It was just a great sense of immensity.”

Vande Hei was asked about cleaning the outside of the space station (it’s not a job he’s been tasked with, he said). He was asked if he’s seen any space junk (no, he hasn’t). What were his thoughts on potential commercial flights to the space station? (He’s looking forward to it). And what is it like to drink a carbonated beverage in zero gravity? (“I certainly wouldn’t want to open one up and have anything fizzy coming up the straw,” he said).

Becca asked, “What is the scariest thing you have experienced while exploring the unknown?”

Vande Hei answered, “I would say being outside on a spacewalk was the scariest thing. It’s an environment where you have to pay very close attention to everything you do for a number of hours.”

“How did your body mentally and physically first react when you arrived in space?” Aspen asked.

“When I first got to space, I was in [a Russian] Soyuz spacecraft,” Vande Hei said. “It felt kind of like being at the top of a fast rollercoaster when you rise out of your seat.” But unlike a rollercoaster, it wasn’t a temporary sensation.

“It felt like the spacecraft was falling away from me, like someone holding me up by my feet. Mentally, I was very excited.”

Acacia asked if the stars look any different from space.

“One thing that’s nice about Earth: You can look from horizon to horizon and see stars,” Vande Hei said. “On the space station, I can only see stars through a pretty narrow window.”

He said what he misses most about being on Earth is, first, his family; and second, the feeling of sunshine and wind.

Mia asked Vande Hei what advice he would give to a middle-school student aspiring to become an astronaut.

“Figure out what you love to do and figure out how to do it for a job,” he said. “NASA hires all kinds of people … and they’re very successful in those fields. And doing something you love is a great way to be successful at it.”

When the questions were complete, Vande Hei signed off with a zero-G flip and a wave.

Frank Rimkus, CEO of Galaxy Theaters, said, “Do you realize what we just saw? Do you really understand? We’re all sitting in this theater and we’re talking to someone who is 457 miles up in space. We’re sitting here, and he’s doing 17,150 mph. We see one [sunset] a day; he’ll see 16 in the same amount of time.”

A message from U.S. Rep. Derek Kilmer, D-Gig Harbor, was played for the students.

“I’m in the other Washington,” he said, “which sometimes feels like outer space.”

Kilmer spoke to students about Richard Gordon, a North Kitsap High School graduate who served as command module pilot for the Apollo 12 mission to the moon. Gordon died on Nov. 6. (goo.gl/z8Z79W)

“Richard … chose to study the hard stuff, and he was one of the people picked for the coolest job there is,” Kilmer said. “He was one of the first humans to see Earth from space. He got to pilot aircraft to the moon. He got to do all of this because, like all of you, he studied hard. Because of him and other people like him, our country rallied together and created a bunch of new stuff.

“In your lifetime, we’re going to go to Mars, and any one of you could be on that spaceship,” Kilmer said. “Our country is counting on you to do the stuff that’s not easy, but hard. Learn skills that let you build stuff and design stuff, and it will pay off.”

Rear Adm. Gary Mayes, USN, then spoke to the students about the importance of science, technology, engineering and math skills in the military.

“A tremendous amount of engineering and tech goes into making your military ready for action,” Mayes said. “Everyday, the Navy researches, develops and tests … We need creative thinkers. We need problem solvers. We need you — when you’re a little older.”

Mayes said that more than 60 percent of astronauts are former members of the military, and most of those astronauts came from the Navy (83 served in the Navy, 81 in the Air Force).

“The Navy gives you pretty good odds of making it into all kinds of cool places, including into space,” Mayes said.

Lt. Col. Carol Hickey, U.S. Army, said in good humor, “Your teachers invited me here to talk about leadership with you, a bunch of science nerds. It turns out that’s exactly who I need to be speaking to.”

“One phrase of the military intelligence creed is ‘In truth lies victory,’ ” she said. “Know, find and never lose the enemy. We observe, we research, we analyze and hypothesize.”

When a recorded message from Sen. Patty Murray played, she told students, “It’s important to remember the astronauts and scientists got their start sitting where you are today. By studying hard in school, these women and men used their education to skyrocket their start in space. There are so many paths to get you where you want to be, but it all begins in the classroom.

“Never forget, if you work hard, ask questions and keep an open mind, nothing will stand in your way to achieving your goals.”

Kilmer ended his video with well-wishes.

Deaths may have been murder-suicide

So far, 18 positive cases have been reported in July

Exactly one year after Stonechild Chiefstick, of the Chippewa Cree tribe of… Continue reading

For the moment, Kitsap County is managing the COVID-19 pandemic, but worries… Continue reading

NKSD will use hybrid learning model next school year

22 active cases of COVID-19 in Kitsap